MORE AND MORE WE ARE BECOMING AWARE of the ecological crises looming around us. As our collective awareness grows, we long to make amends, to play our part, to do something.  Alarmed and well meaning, we long to help the planet, to live sustainably, to protect nature and to make our homes and enterprises circular and net-zero.

To do so we're striving to go green.

But how exactly does one 'help the planet'?  What kind of world is our 'sustainability' sustaining?  What precisely does ‘nature’ mean?  And who says ‘circular’ is the right geometry or that 'net-zero' is enough?

What, in fact, should ‘green’ really mean?

Alas, in our modern green endeavors we catch the hint of troubling contradictions.  An electric car charged by coal generated power. A forest cut for carbon neutral energy.   An organic vegetable shipped a thousand miles. A natural product wrapped in plastic.

Indeed, while our best intentions may be a shade of luminous green, all too often they are dependent on processes that have dark grey impacts— mines, clear-cuts, fuel-burning and factories— processes that results in the degradation of biodiversity and of ecosystems.  In fact, all too often, the cumulative effect of these intentions seems to be greyer than it is green.

How do we reconcile such grey impacts with our green goals?  Are such process still "green"?  Or, could it be that our modern green values are not as solid as they seem?

Over the last decade, my colleague Banayan and I have been working on local solutions to plastic's grey impacts.  In comparing local to industrial solutions, we've come to question much that we once thought to be green.

Maybe you have too.

Indeed, investigative journalism has decisively debunked so many of the modern ‘green’ things we once esteemed. From biomass energy to palm-oil products; from industrial recycling to oxy-degradeable plastics, it turns out that within so much of what we were once so sure was green, was in fact a dark shade of grey.

These all-too recent debacles remind us that what business, industry or politicians deem green are not necessarily so. All too often vested interests run deep.  Nor, is the definition of green the role of scientists.  Although, their impartial evaluation is invaluable, their role is not that of laying out the values upon which their conclusions are based.

Rather, discerning what green should mean is the realm of philosophy and, more specifically, of ethics.

Yet even more so, it is the realm of the forest and the fish— and those of our ancestors who have lived closest to them.  After all, if there’s anyone or any ‘thing’, that can teach us about greening contributions, it is those who have decisively done so.

Around the world, certain cultures have excelled far more than others at the art of green. As we shall see in the forthcoming installment of the Tractatus Ayyew, the societies that came to see the creatures around them as kin were able to learn from them.  Inspired by the magnificent ways of certain plants and animals, these cultures developed a way of knowing that enabled them to ever improve their own ecological integration. Their ecological epistemology enabled human, plant and animal to steadily co-engineer the very conditions for all to thrive.  Rather than deplete the ecosystems around them, they steadily enriched them.

Growing up in the traditional territory of the Kwanlin Dün, beside the Yukon river, I had an early experience of such a culture.  Coming from a family of Scottish and German ancestry, I was in awe of every brush with their fantastically different ways.  Alas, as a child of those settling their land, I (nor they) received any schooling of their language or traditions. However, through the heavy blanket of modern life that covered our town, glimmers of their culture (totems, stories, games, celebrations) would peak through— ancient ways that had enabled the Kwanlin Dün to thrive in the harsh sub-arctic for almost ten thousand years.

Later, I settled further south in the unceded traditional territory of the Wet’suwet’en beside the Bulkley River.  Much later, on the other side of the world, I made my home in the ancestral lands of the Igorots— one of the few unconquered indigenous peoples of South East Asia, situated in the highlands of northern Luzon in the West Philippine Sea.

I am convinced by these experiences that a comprehensive ecological ethic must implicitly recognize cultures like those of the Wet’suwet’en, the Kwanlin Dün and the Igorots.

As we shall see in the chapters ahead, there's has long been a correlation between the degradation of ecosystems and the disregard of these cultures.  Those busy colonizing their lands over the last centuries simply did not recognize the ecological sophistication of the societies they were displacing.  Equally imperceptible were the long-term consequences of their seeming innocuous farming, fishing and settling endeavours.  However, today we can now clearly observe how the forest-cover, the biodiversity, and the soil fertility of the continental biome have been inexorably degraded by the last centuries of settlement.   Just as color blindness is due to deficiencies in the receptors at the back the eye, deficiencies in the world view of the settlers, blinded them to the cultural and ecological denigration they were perpetuating.

Today, such staggering blindness can seem incomprehensible to the children of both settlers and the settled alike.  However, it is important to remember that the modern culture that now touches us all, inherits more than anything, the values and views of its colonizers.  Could it be that this blindness remains?   Could this centuries-old shortsightedness be the unconscious grey inclination of our modern green intentions?

Ten years ago, I had a unique opportunity to observe my own shortsightedness.  For five years, I made my home in the traditional territory of the Igorots. There I learned their language, heard their stories and danced in their steps. I observed the biodiversity they supported, their sync with the seasons and their fierce love of river and forest.  Reminded of the Kwanlin Dün, I observed how their ways of life radically centered on the ecological cycles around them— culture and ecology each enriching the other until the line between the two was indistinguishable.

While I cannot speak first-hand of the Igorot view of the world (in this Banayan will assist in the installments ahead) I can however speak of my own.  Awed by the depth of the Igorot cosmology, I saw the dire deficiencies in my own world view for the first time.

Although astronomers have long disproved that the Earth is the center of the cosmos and biologists have long dismissed that humans are the top of life’s tree, with the Igorot view contrasted with my own, it became clear that the momentum of these ancient misconceptions remained in the hidden depths of my subconscious.  The centralization and separateness of man persisted as an inertial undead defaults, permeating my views, my words and my ways.

I came to see that although modern capitalists and communists, neo-liberals and socialists may debate their differences their underlying foundations are all but the same.  Side by side the Igorot world view, these seemingly disparate modern ideologies share a remarkably consistent cosmology— an underlying view of the world in which humans are central and separate and where the line between culture and ecology is starkly defined.

The modern ethics that result from this foundation (laws, sustainability guidelines, UN goals, etc.) are thus locked into the view of human interests, human rights, human-time scale and human space. From this view, the concept of ‘nature’ arises as an object with which humanity is ever at odds. Their ensuing ideologies fail to contrive any means for human ecological contribution, nor framework for enrichment: the best we can do is reduce our harm, conserve and preserve what remains of the ‘natural world’.

Banayan and I observe that not only does this view fail to represent the dynamic of ecological enrichment that the Igorots have long experienced, it also fails to capture the deep human longing of our times to participate positively: to contribute to the ecosystems of which we are immersed.

To rise to this call and to achieve authenticity in our green endeavours, we have come to see that the very concept of ‘nature’ must first crumble like the ancient rusted chain that it is. Only then, can we shatter the mind forged manacles of antiquated, anthropocentric cosmology and open the door to the ecological regeneration and enrichment that our moment requires.

To do so, there is only one hammer.  Long discounted and disparaged, the ancient ecological epistemology of our indigenous ancestors beckons heavy with power and potential.  However to pick it up recognition is requisite— acknowledgment of our modern world's cosmological complicity in the ecological and cultural denigrations of yesterday and today.

With our shackles shattered, the door to ecological contribution can at last be opened.  Through it, Banayan and I step forward to present a theory of grey and green in the Tractatus Ayyew ahead.   In the same way our indigenous brothers and sisters found inspiration and guidance in the example of magnificent creatures, we believe that we can be inspired and guided by the example of our common home—planet Earth.

As we shall see, the way forward isn’t so much about fixing our current technologies — nor even about inventing new ones.  Instead, it is in the humility of seeing clearly our place and part in the biosphere. While, modern concepts such as ‘circular economics’, ‘sustainability’, 'zeroing our waste' and 'negating carbon' shall still have their place, it is not as goals to aspire to— but the baselines to begin.

Only then, can we hope to aspire to the great planetary contributions our neighboring organisms and ecosystems are quietly making day in and day out.

Enter your email
Subscribe
Happy Holidays dear Earthen subscribers! As the new year approaches I want to share my grattitude for your subscription and support over the last year.  And... I want to share some great news! At long last, the first book of the Tractatus Ayyew is published! Over the last few months,

The Earth’s cycles tend towards the outwards dissipation of energy. —Earthen Ethic No. 2 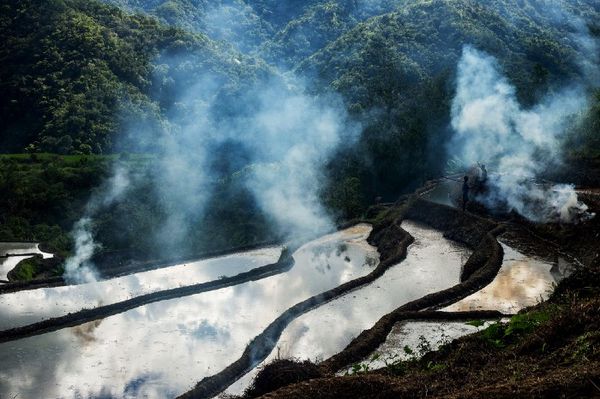 The Earth’s processes tend towards cycles that spiral. —Earthen Ethic No. 1